An extract from sugar beets, TMG is a natural polysaccharide and a good source of methyl groups that promotes healthier levels of the powerful pro-oxidant and free radical generator homocysteine. Homocysteine is a toxic end product of the metabolism (methylation) of methionine (an essential amino acid) and is now known to be a leading cause of heart and artery disease.

DMG can also make a positive contribution in many areas of cellular metabolism including neurotransmitter production, oxidative stress reduction and energy production in the brain. Perhaps future research in this very important field will shed more light on why DMG can benefit the lives of many children with autism.

TMG is a byproduct of sugar beet processing and is a known methyl donor. Through methyl transfers, betaine is derived from choline and subsequent reactions convert betaine to dimethylglycine. Betaine may influence neurological function indirectly via 5-adenosylmethionine synthesis. Animal studies have demonstrated that supplementary intake of betaine had a 2- to 5-fold increase in SAM concentrations. Hyland et al reported increased SAM concentrations to near normal in a patient suffering from 5,10-methylenetetrahydrofolate reductase (an enzyme involved in the regeneration of methionine) deficiency where initial SAM concentration were undetectable.

Methylation reactions and how they relate to the prevention of many diseases such as cancer, heart disease, liver disease and neurological disorders are a growing area of interest for researchers.

TMG is in available in powdered form, and is found in many over-the-counter preparations in health food stores.

NOTE: An inexpensive variety is Betaine HCL which acts as a stomach acidifier and is not practical due to stomach irritation at the doses required to enhance methylation metabolism.

Function; Why it is Recommended

In the liver, TMG transfers one of its three methyl groups to homocysteine, which is then converted into the useful amino acidmethionine.

When methylation is working properly, homocysteine is quickly converted back to methionine which is then converted to SAMe (S-adenosylmethionine), which protects the liver and is a natural antidepressant. [2][3] SAMe then acts as a methyl donor for DNA: when attached to DNA, methyl groups appear protective, preventing mutated genes from expressing themselves. [4] It may improve health, reduce the risk of genetically induced cancers, and slow cellular aging. Factors that decrease methylation include smoking, alcohol consumption, high fat diets and birth control pills.

Multiple studies have demonstrated that medium to high levels of plasma homocysteine are associated with increased risk of heart disease, cerebrovascular disease and peripheral artery disease. In one study, daily treatment with TMG, folic acid and choline normalized homocysteine levels in 17 of 19 patients. [1] TMG lowers homocysteine levels with and without vitamins B12, B6 and folic acid.

Along with cofactors such as vitamins B6, B12 and Folic Acid, TMG is part of a chemical contingent in the body that works against cancer, heart and neurological diseases, and nearly every age-related disorder.

TMG is a versatile nutrient and provides an intermediary metabolite that can enable a person or animal to function at more optimum mental and physical levels. It aids the body in overcoming a number of adverse health conditions, and is an intricate part of human metabolism. DMG (TMG's metabolite) has been used as a nutritional supplement for over 25 years. In a broad sense, TMG protects the body from many forms of physical, metabolic and environmental stress.

The usual TMG dose is 500 to 1,000mg per day – roughly equivalent to what a diet high in broccoli, spinach or beets would provide. 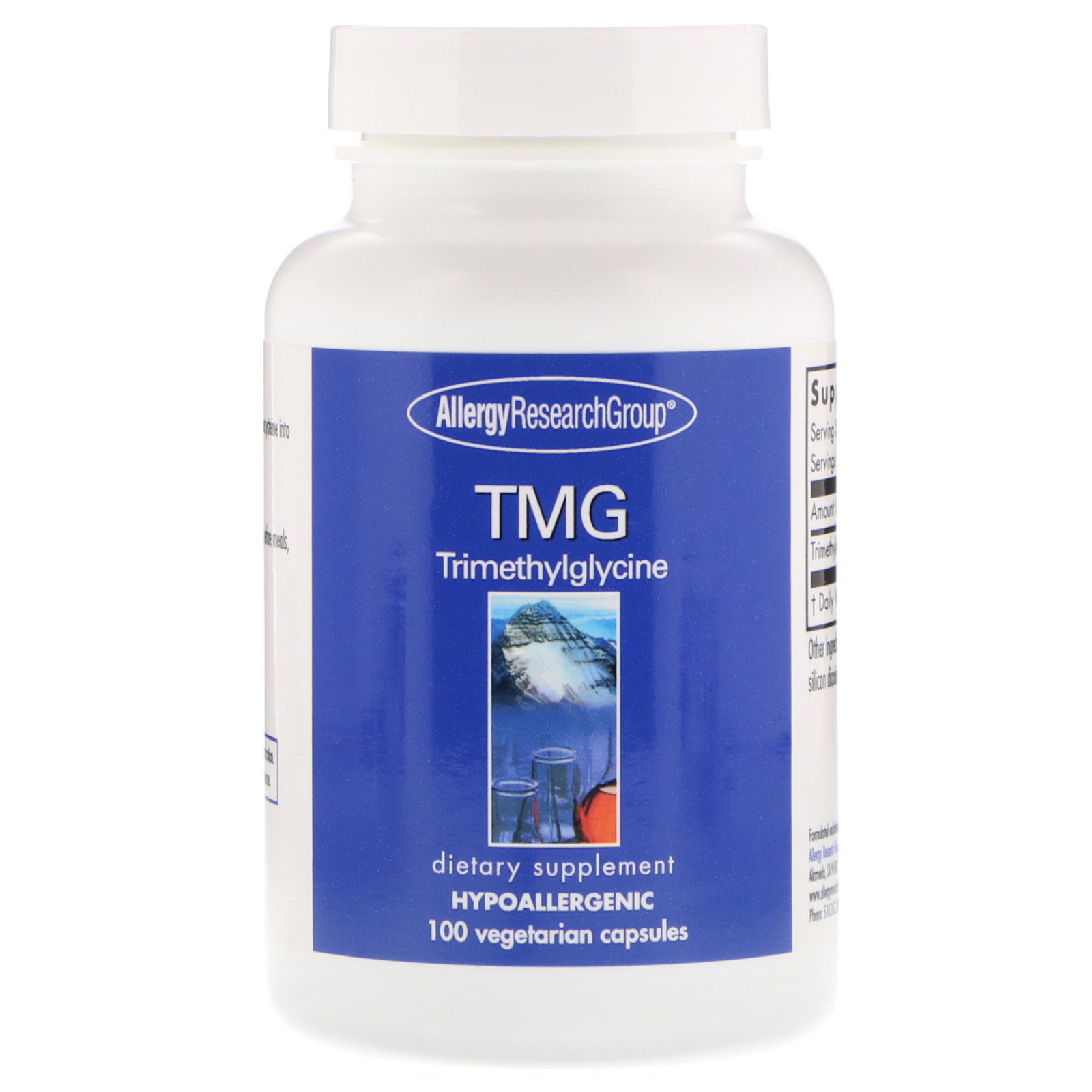