Formula One 2003 is a racing video game developed by Studio Liverpool and published by Sony Computer Entertainment exclusively for PlayStation 2. It is a sequel to the 2002video gameFormula One 2002 and was based on the 2003 Formula One World Championship.[1]

The game features all ten teams and twenty drivers competing in the 2003 Formula One World Championship (except for mid-season changes), as well as the sixteen circuits and Grands Prix that formed the championship calendar. The game also includes the new one-shot qualifying rules and points system introduced for the 2003 Formula One World Championship, as well as the alterations to the Hungaroring and Suzuka circuits.[1]

There are eleven game modes available for single and multiplayer, including single-player arcade and simulation single race, time trial and championship modes, multiplayer for up to 4 players and a non-interactive spectator option.[1] Online connectivity is not supported.[2] 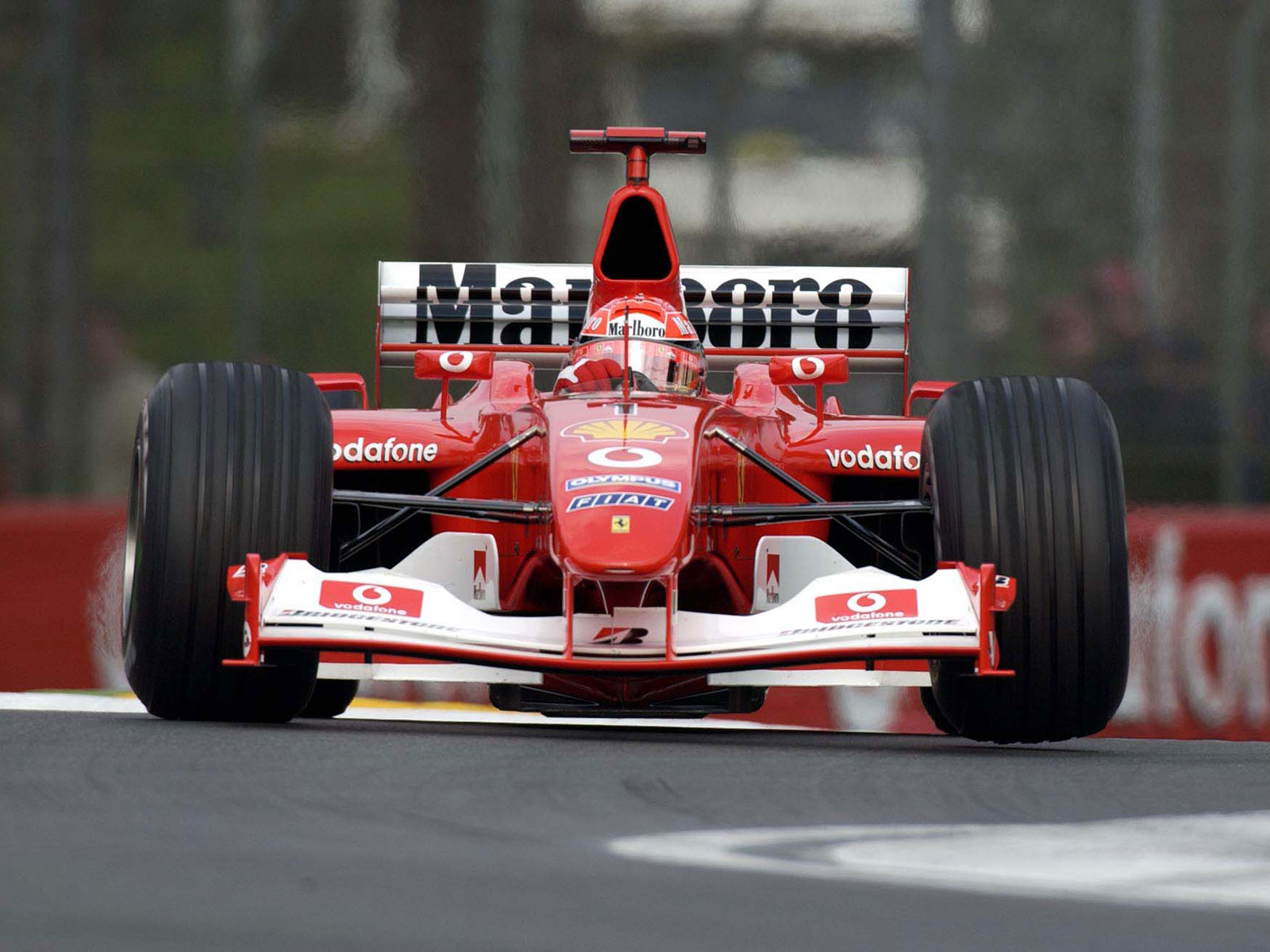 2003 was a championship that went down to the last race in Suzuka but ultimately Schumacher took his 6th Drivers’ title (beating Fangio’s record) and Ferrari won its fifth straight Constructors’ crown. Formula One 2003 was announced in a press release from Sony Computer Entertainment on 16 June 2003 with a July release date. 3 4 The game was the first Formula One series to have an exclusive license from the Formula One Administration (FOA), which is responsible for the commercial rights and promotion of the Formula One world championship.

The game features 16 official Formula One circuits based on the 2003 Formula One World Championship.

Similar to the FIFA series, Formula One 2003 has different cover art depending on the region. David Coulthard's McLaren MP4-17D is used on the European/Global release.[5] Fernando Alonso's Renault R23B was used on the Spanish release.[6] Michael Schumacher's Ferrari F2003-GA is moved from the second car to the leading car for the Italian release.[7] Heinz-Harald Frentzen's Sauber C22 is featured on the Swiss and Dutch releases.[8] Mark Webber's Jaguar R4 is used on the Australian edition.[9]

Formula One 2003 gained mixed to positive reviews upon release, holding an aggregate score of 67.20% on GameRankings.[10]

Kristan Reed of Eurogamer praised the controls and the graphics, stating 'every track is packed with detail, down to the individual trackside adverts, yet there is never any hint of pop up or the kind of draw distance issues that have blighted just about every F1 game ever made.'[11] He did however have reservations about the game's car damage and crash physics. He gave the game 8 out of 10.[11] Brodie Gibbons of Futuregamez also praised the graphics but criticised the sound and replay value, scoring the game 77%.[12] Writing in The Guardian, Jack Schofield noted that the game did not offer a large improvement over its predecessor outside the rule changes, but concluded that it 'offers more than enough to keep casual gamers happy.'[2]

All alcohol and tobacco sponsors are censored.

F1 Challenge '99-'02 allows players to begin as a rookie driver, earn licenses, compete for cars, join a team, develop racing skills, and race for the world championship. Users can create their own racer -- customizing items like helmets -- or choose from established Formula One stars. Redesigned F1 gameplay includes improved AI, realistic accidents, and option screens available during a race for car adjustments. Players will receive real-time feedback from their chief mechanic and team boss during a race.

F1 Challenge '99-'02 crams a lot of sim nirvana into a sleek package. As its name implies, it flaunts four seasons of Formula One racing, including the drivers, cars, and tracks from 1999 to 2002. Therein lies the first caveat: You can emulate dozens of drivers and race tons of tracks, and you can play through an entire season for points, but the game lacks an ongoing 'career' mode -- don't get it confused with EA's upcoming F1 Career Challenge for PlayStation 2. It's not a big loss, though, because there's still plenty to do.

Although it's a driving game, F1 Challenge '99-'02 is closer to Microsoft Flight Simulator than it is to arcade driving ditties like Midtown Madness. It offers a staggering amount of adjustable options to help noobs and satisfy grognards -- everything from breaking aid in the turns, a fully automatic transmission, and clutch assistance to a plain-old insane amount of vehicle adjustments. The only way to ultimately master this game is to practice. In fact, several practice runs are built-in before each race; you can skip them if you wish, but it's foolhardy to attempt a race without intimately knowing the track.

Realistically, the pavement on most of the tracks is streaked dark along the optimal line, giving you a clue of where your vehicle should be at any given point. Little touches like that round out an outstanding graphics engine. The look of the game is darn near photorealistic; the cars and tracks are beautifully modeled down to the tiniest detail. Paired with these eye-popping graphics is ear-popping audio. The engine sounds come from real recordings of F1 cars, so it's not surprising that they sound accurate. The audio includes Doppler effects, which you can hear best from a stationary, trackside point of view.

The game overflows with realism, right down to ad space 'purchased' by real companies. You might see a bridge over the track adorned with the Michelin man, the Bridgestone logo on the tires on your car, a Toyota billboard, or some other advertisement. Sure, it reeks of as much commercialism as a Tomb Raider movie, but in doing so it makes for a very lifelike experience.

Your car is as responsive as you'd expect an F1 roadster to be. We tested it with both a Saitek Cyborg 3D Gold joystick and a Thrustmaster NASCAR Pro Force Feedback driving wheel. While keyboard controls are also offered, the only way to get the most out of this game is to employ a good driving wheel -- a force feedback model if possible. The game makes excellent use of forces, from momentum changes while rounding corners to vibrations when you slip off the track and cruise over grass or gravel.

It's easy to slide off the track. The physics model in F1 Challenge '99-'02 is obviously the product of tender lovin' care and endless testing. Screaming down the straightaways emotes a breathtaking sense of speed. Learning how to take the turns is tricky, and it's easy to spin out if you wait too long to downshift or hit the brakes. On that note, the damage model has to be inspired by actual, gut wrenching crashes. There's an option for invulnerability, but with it your disabled vehicle explosively hemorrhages parts if you hit a wall or wrap it up with another racer.

Tearing up the track is only one component of a successful race. You're also encouraged to come up with a strategy concerning how many pit stops you'll make and what will be done during each one. During long races you'll need fuel and tire changes to keep up the pace. Tires do wear, and there's a noticeable difference in the handling of a car with cold tires versus race-temperature tires.

Full of caring touches and a microscope-like attention to detail, F1 Challenge '99-'02 is the ultimate thinking person's open-wheel racing sim. It's too bad that EA's not planning any successors, but with a full four seasons worth of racing, this sim might have the stuff to keep you on the track until another publisher picks up an F1 license.