All the talk of end-game Mechro damage makes me want to give it a shot on the raid bosses. Just got through another set of playthroughs with some co-op buddies to just shy of Level 50. Ended up building in the left and middle trees (Whereas, the single-player Mechro save I got to level 35 was mostly Anarchy based) and didn't get to see much end. Once you get settled into Guild Wars 2, you will find that ascended gear comes easy because you naturally accrue currency from each game type as you play. However, your first set of ascended will always be the hardest to attain.

Posted at 04:42h in Uncategorized0 Comments

So for Vulnerability, would this lower the armor more or something? --The preceding unsigned comment was added by212.139.247.68 (talk).

As the name implies, Condition Damage increases condition damage, so vulnerability will not benefit from this since it has a fixed armor denial value of 1% per stack, therefore you will benefit more from Condition Duration (Expertise) if you want to stack Vulnerability. --Rapid Sausage 18:34, 18 August 2012 (UTC)

Malice is the historical name for the Condition Damage statistic, with only a couple references to it left, like in Banner of Strength. I think when they removed those names (which was right before BWE1, i.e. the first time I was able to play the game), they also upscaled these stats by 10. Otherwise they're exactly the same. —Dr Ishmael 18:45, 18 August 2012 (UTC)

Well that raises another question, does 1 point of condition damage serve as 10 points for the purposes of condition formulas' calculation?, or is it 1:1? --Rapid Sausage 18:48, 18 August 2012 (UTC)

When we have another chance to check, with q&a or in-game testing, can we be sure to also check Retaliation, just out of curiosity? I'm aware by all definitions it shouldn't be affected, but this seems like the most likely attribute to influence retaliation damage, if any. 184.76.11.55 01:50, 21 June 2012 (UTC)

So I was annoyed that there was no central location for 'How much does Condition Damage help me?'Then I made a table. It's kind of ugly but looking up the format for it has ended my attention span. More importantly, I'm simply assuming the values on the individual condition pages are correct- I didn't go test these myself. I'd like to do a similar table for Healing Power, but that's going to take a lot of testing and I'm not up to it today. --Chompie 21:19, 7 September 2012 (UTC)

I did some calculations on burning for level 80 (not sure how and if level affects the multiplier)but it seems that 1 point in condition damage will give .2305~ points in burning damage per second. Is that a miscalculation on my part? or is 25% rounded up? Exhibit 18:56, 14 September 2012 (UTC)exhibit

Let's say a ranger and a warrior are adventuring together. The ranger places a Sun Spirit. The warrior attacks an enemy, and the spirit effect triggers, causing burning. Is the burn damage calculated based on the warrior's condition damage stat, or the ranger's? 96.39.120.89 15:58, 30 September 2012 (UTC)

Most likely the ranger since it's the ranger's spirit that initiated the condition effect in the first place, in fact the tooltip for the spirit probably specifies some kind of damage value or duration, I haven't looked myself yet 71.68.238.112 20:32, 22 October 2012 (UTC) 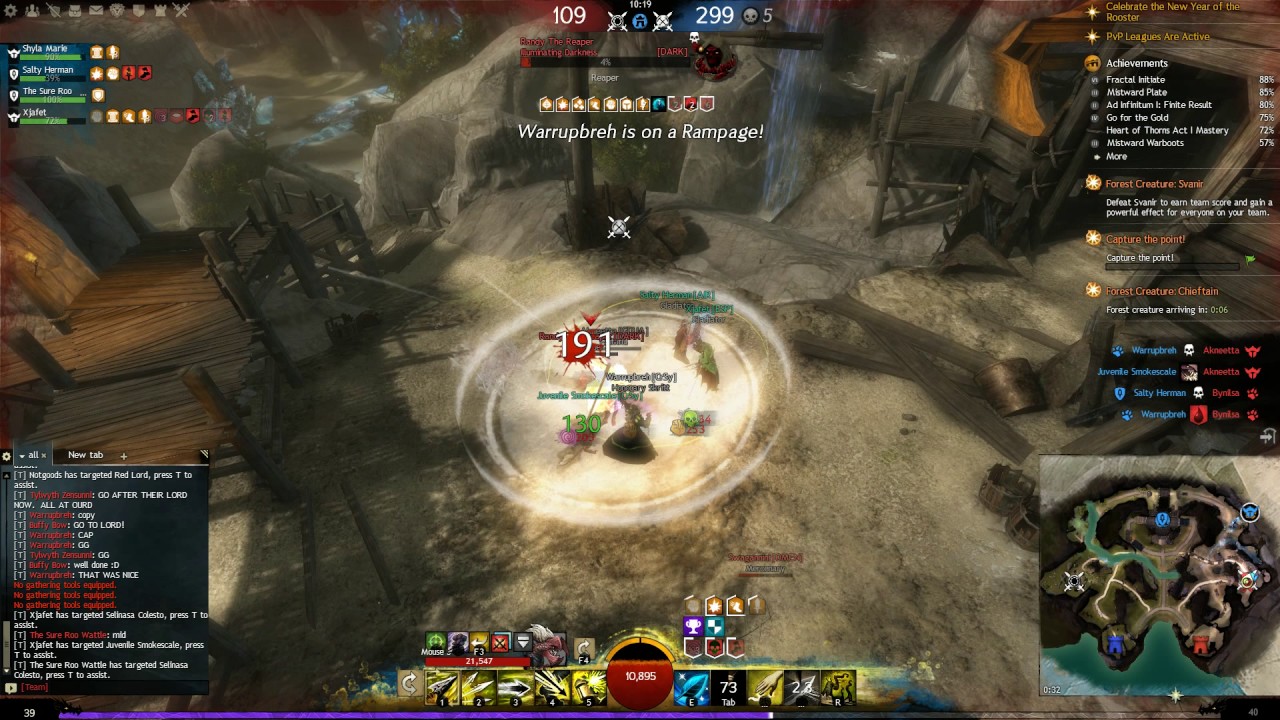 I made a table with every point of condition damage from 0-2500 and at the top I list every 500 milestone mark. I know its possible to get up to ~2300ish condition damage in the game, but decided to throw in the rest just in case someone else knows of something I dont. https://docs.google.com/spreadsheet/pub?key=0ApbbAUHZTALUdGNpLXZSbi12aDk0RzlxQXNER01XWkE&output=html --68.226.52.217 21:26, 9 November 2012 (UTC)

Damage is recalculated every pulse based on the changing stats of hundreds of players?[edit]

The Notes section of the page states:Any condition damage that is currently affecting a target, will update per tick according to the source character's stats. For example, An Engineer may inflict Bleed with an Elixir Gun toolkit and then swap to a pair of +condition damage pistols in order to increase the damage over time, even if no further conditions are inflicted.

I find that extremely hard to believe, that every second, every condition pulse is recalculated based on the current stats of the source of the condition. If that is really the case, then it would explain a part of why the game has so many lag issues that they're forced to delay drawing characters because servers lack the computational power. I wonder if someone would be kind enough to verify this in PvE/PvP/WvW. (For example place a lengthy burn/poison/bleed, observe the damage, then switch gear.)

(Thinking about it, I don't even think it makes sense to do that. If I poison a knife and stab with it (not talking about the thief's venom mechanic, but a realistic situation), then I apply a stronger poison to it and sheathe it, would that make the person I stabbed before hurt more? If you're good with a knife and can cause your stabs to bleed more than the next guy, does that mean you can stab then move away and do something to your gear to make the previous wound bleed more?) --Alad 20:49, 6 March 2013 (UTC)

I tested it myself a while back. Don't even have to change gear (which you can only do by weapon swapping in any case, since you'll be in combat), just give yourself Might. Apply condition, stop attacking, apply might - ticking damage goes up. —Dr Ishmael 21:06, 6 March 2013 (UTC)

Amazing. I'm wondering now where this calculation takes place. If in the client, then their protocol is a lot more vulnerable than I expected. (And I'm not astonished they can't do much about all the hacker bots teleporting across all maps for months now.) --Alad 21:45, 6 March 2013 (UTC)

it was also mentioned on the stacking page, bleeding damage from a specific source will only update if the source's stats was changed as like with might as previously mentioned. don't see anything wrong when its that simple. 67.233.98.18 00:12, 7 March 2013 (UTC)

I'm curious precisely when during an interval that condition damage hits. For example, if there is a 2s condition, does that result in 2 hits or 3 hits? If conditions hit once on their application, then it would be 3 (initial, 1s, 2s). If not, it would be 2 hits. And, do conditions each have their own unique start and end time or are the hits controlled by a 'condition clock' that processes all active conditions each second?

For the later, if a condition lands when the 'condition clock' is just about to tick, you would perhaps get an extra hit. This behavior would be more apparent with fractional durations. A 2.5s duration would give 3 hits roughly half the time in this case. Knowing this doesn't much matter for small hitting conditions like bleed and poison, but it might make a difference when building for burning and terror. Okuza (talk) 12:25, 12 November 2013 (UTC)

Graph is done with Wolfram Alpha and can be easily adjusted.Colors of graphs are given right of plot, from top to bottom:

I got a necro and an ele with the exact same type of gear. Both have traits aimed at maxing condition damages. The Necro has ascended stuff, while the ele got the exotic version only. Yet my ele do a lot more condition damages right of the bat. I have been bogued by this for while and continue to curse Anet because of that. Is it a bug or something ? Is it intended ? Yseron - 109.212.34.90 22:24, 18 May 2015 (UTC)

Which trait lines have you spent points in? If you went with Earth Magic for your elementalist but didn't spend anything in Curses on your necromancer, that would explain it. —Dr Ishmael 22:48, 18 May 2015 (UTC)

That would be Earth Magic, the one I linked. Do you have the Strength of Stone trait slotted on your ele? (10% of Toughness added to Condition Damage) There's no comparable trait for necro. —Dr Ishmael 23:38, 18 May 2015 (UTC)

Apparently Base and Factor were changed for Confusion and Torment. SarielV 16:32, 11 August 2017 (UTC)

Renegade rune needs to be added[edit]

The explanation is really poor. What unit is it measured in? Is expertise or condi damage better below the breakpoint?

The table of conditions and damage includes a column called Breakpoint. The footnote for this column says 'The amount of Condition Damage at which one point of expertise will yield the same increase as one point of condition damage.'

I don't really understand this myself, but I've had a go at showing some of the thought behind it on a heatmap.

If you zoom in you'll find:

Obviously there's a limit to how much extra Condition duration you're allowed (up to +100%, either wholely through 1500 expertise or with item buffs too like Superior Sigil of Malice + utilities).
It might be helpful if we reword the description of the breakpoint so that its clear that beyond the 'breakpoint' Condition Damage attribute value, it's better to invest in Expertise. -Chieftain Alex 00:20, 20 April 2020 (UTC)

Minor remark to the graphic: The bleeding breakpoint of 1133,3 (periodic) could be best worked out with 33.3 (periodic) steps instead of 50 steps as above.
See also a wolfram alpha plot for bleeding, of course a spreadsheet provides more information.

'It might be helpful if we reword the description of the breakpoint so that its clear that beyond the 'breakpoint' Condition Damage attribute value, it's better to invest in Expertise.'
Well, that's not really true. If you have a certain amount of stats points that you can either distribute to Condition Damage or Expertise, then in order to gain the highest possible damage you have to distribute it in the following way:
Please also note, that (as the Condition Damage#Calculating breakpoints describes) any bonus condition duration (e.g. runes or sigils) increases the breakpoint, e.g. having a +20% condition duration rune and and +10% condition duration sigil for bleeding the breakpoint is inceased from 1133.33 to 1133.33 + (20 + 10) * 15 = 1583. Due to the bonus duration, the condition damage becomes much more 'worth' while expertise becomes 'worth' less.
Furthermore, the breakpoint is a technically point of view that doesn't consider other aspects, e.g. attributes are bound to armor/weapon/trinket pieces with a fixed distribution rather than being freely available, does the condition duration exceed the 100% cap, is there a time frame (e.g. bosses living only for a certain amount of time), can conditions be removed,...
--Tolkyria (talk) 10:18, 20 April 2020 (UTC)