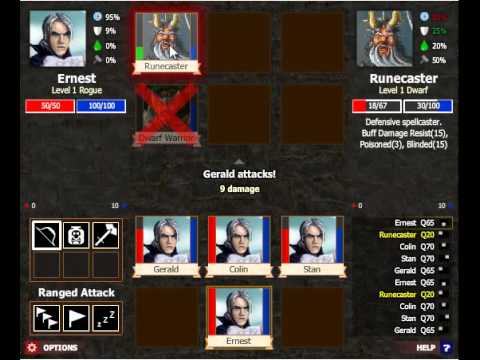 Easy as pie. This should only take you about two levels. Just play into the normal dungeon, and take all the loot you can. Always equip the best stuff using the 'recommend' tab in your inventory. Whenever you are forced to get rid of items, sort by value using the tab on the bottom and get rid of the items with the least value until you have room in your inventory. Don't get rid of your potions, though. Now, to actually get the gold, find a portal scroll. Make sure you explore and clear the entire dungeon every time. When you get a scroll, drag it onto a character, just like a potion, to go to the shop. Then, simply sell your inventory. Save up until you got 10K gold.

Play through the dungeons. For the Den of Endless Evil, this will end when you defeat the Corruptor on level 9. To beat him, you must do one of two things:
1)Use a mana depleting ability such as the Rogue's 'Sap Strength' to prevent him from cloning you.
2)Use the Conjuror's ability to instantly kill his summoned creatures.
For the Den of Corruption, you must collect the fragments of the Journeyman's stone. They will be spread over the first 9 levels in each battle that has a Fearsower. Use the stone just like a portal scroll to teleport to the Dreadfather, the boss you must beat. He's not that hard. Just watch out for those Fearsowers he keeps using to protect himself.Fight off the Fearsowers with melee while someone with ranged attacks works on the Dreadfather.

See the Fall of Tellunos Guide for this one.

Fall of Tellunos Guide:
This guide will help you get to level 40 for the badge and can even get you to level 100.
Pick your classes.
We need someone to take the brunt of the attacks and be on the front lines. the Warrior is the best suited for this because he can wear heavy armor and use almost any weapon.
We also need someone to revive the dead. Clerics are the best choice because they can also wear heavy armor.
But what will we do if our Cleric dies? Have a Conjuror revive him of course. Also, his Manasprites willl be indespensible.
Now we need someone to do damage from the back ranks. The class best suited for this job is the Ranger A Mage would also be nice, but he has weak armor.
Stat Points: Put ALL of them into endurance for everyone. Maybe put a few into intelligence for the Cleric.
Skills:
Warrior:
Attack. (of course) Inspire is valuable as its effect lasts throughout the entire campaign in this mode. Adrenaline is also very useful. Shield wall can protect dying allies. Cleave is also pretty handy if you want to try and kill 3 enemies at once. Execute is extremely good to have as you will have a good chance of killing your target in one git, especially with full power.
Put all remaining skill points into Leadership.
Cleric:
Attack. Heal is something you simply cannot go without. Revive is also necessary. Anoint can be very useful. Holy light is valuable, especially against something with already low accuracy. I also recommend Heal All.
Put all remaining skill points into Benediction.
Conjuror:
Attack. (duh) Call soul is necessary if your Cleric dies. Eldritch Aegis is indespensible. Manasprite is vital to keep your allies fulll of power. Wall of shadows is absolutely necessary if you ever need to lift a curse. I also recommend Refresh Energies. However, you can use Wargolem if you really want to.
Put all remaining skill points into Augment Strength.
Ranger:
Attack. Nature's Balm is really good to use on everyone. Pierce is pretty useful. Hail of Arrows is very good, especially if you have a vemomous or vampiric weapon. You can also choose Envenomed Arrow to use on guys with a ton of health. Focus or Pin might also be nice.
Divide remaining skill points into Creature Lore and Vitality however you like.
Weapon Selection:
Look for stuff that says 'vampiric.' Those items will give you extra health regeneration. If a vampiric weapon isn't available, go for something venomous. Look for suffixes like 'of lethality' and __.
Warrior:
Get the biggest, baddest one-handed sword so he can use a shield.
Cleric:
Give him a nice mace.
Ranger:
A bow or crossbow. Also get him a quiver. Note that vampiric and venomopur would pretty nice.
Conjuror:
He'll thank you for a nice staff.
Armor Selection:
First get stuff for the warrior, then the Cleric, then the Ranger, and make the Conjuror last priority. Try to give everyone sostuff with some nice health and power regeneration.
Warrior:
Thick and Protective are the way to go. Also, look for soothing and runed for regeneration.
Cleric:
Runed is really nice for him. Also look for stuff with Insight.
Ranger:
He doesn't need as much armor in the back so consider stuff with quickness and maybe accuracy.
Conjuror:
Don't need much for him, though some power regen would be pretty nice.
Don't forget rings and cloaks.
Party setup:
Warrior in the middle front. Cleric next to him on either side. Ranger behind the Warrior. Conjuror in the back row but not behind the Cleric.
Strategy:
Use all buffs immediately. Have fun.