After setting the fastest time in practice, Chandler Smith closed Saturday night celebrating in victory lane after scoring his fifth ARCA Menards Series victory of the season in the rain-shortened Herr’s Potato Chips 200 at Lucas Oil Raceway in Brownsbug, Indiana.

The Jasper, Georgia racer took the lead from his Venturini Motorsports teammate Christian Eckes on lap 161. The next time around, a heavy sprinkle turned into a rain shower necessitating a caution flag. The field circulated behind the pace car for five laps before ARCA officials put out the red flag. The rains persisted and officials were forced to end the race 37 laps before its scheduled conclusion.

“It was meant to be,” Smith said. “We couldn’t have timed that pass out any better than we did.” 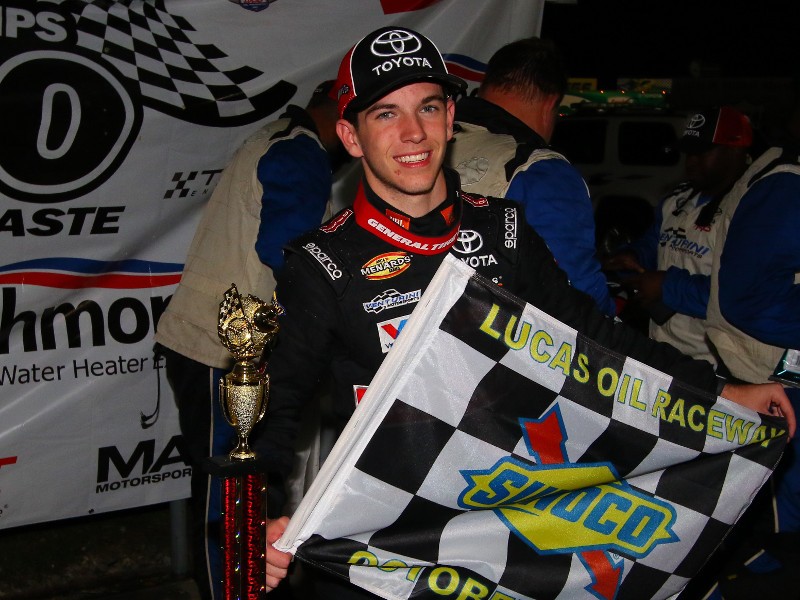 Eckes was disappointed with second, but was able to lock up the Sioux Chief Short Track Challenge championship.

“We’re obviously disappointed with second,” Eckes said, “but it’s our sixth top-two finish in a row. We really have things turned around after a tough stretch in the summer. We’d have liked to have had that caution for rain a few laps earlier though.”

Ty Gibbs started from the General Tire Pole and was the dominant driver throughout the first half of the race. Gibbs led the first 143 laps before contact with Joe Graf, Jr while battling for the lead resulted in Gibbs sliding into the wall and damaging the right rear corner of his car. The damage led to a flat right rear tire that put Gibbs into the wall again four laps later. The damage was too severe for Gibbs to continue leaving him 15th at the finish.

“I don’t even know who that guy is or what happened out there,” Gibbs said. “We had a really great car. I am pretty bummed. Most of all I am sorry for my guys, the deserved a win here tonight.”

Graf had rejoined the lead lap after receiving the free pass under the second caution of the night. He pitted for tires under the yellow and knifed his way through the field racing against other lead lap cars that had not yet pitted. The resulting caution from Gibbs’ crash allowed the remaining lead lap cars to pit, ending Graf’s chances to win. He finished tenth.

Sam Mayer finished third a day after locking up the NASCAR K&N Pro Series East championship with a win at Dover International Speedway. Corey Heim finished in fourth, with Hailie Deegan in fifth.

Combined with a sixth-place finish by teammate Michael Self, Eckes assumes the ARCA Menards Series championship lead by 20 points with only the season finale at Kansas Speedway remaining.

There were four cautions for a total of 25 laps. Bobby Gerhart spun in turn two on lap 52 to bring out the first caution, while Dick crashed in the same turn on lap 97 to bring out the second caution. Gibbs’ accident at lap 146 brought out the third yellow flag of the night while the rain at lap 162 was the final yellow of the night.

There were three lead changes among four drivers. Gibbs led a race-high 143 laps, Graf led seven laps from laps 144 to 150, Eckes led from lap 151 through lap 160 and Smith led from lap 161 to 167 when the race concluded. With those seven laps led, Smith locks up the 2019 Valvoline Lap Leader Award.

The ARCA Kansas 150 at Kansas Speedway will close the 2019 ARCA Menards Series season on Friday, October 18.

Eckes took over the lead when most of the other lead lap cars pitted late in the race and held off two furious charges, first from teammate Logan Seavey and then from eventual runner up Sheldon Creed, en route to the victory.

Eckes nipped Seavey at the line by 0.305 seconds on a two-lap overtime dash to the checkered flag.

Eckes and crew chief Kevin Reed pitted for the final time of the day under the second caution flag at lap 50. When the rest of the lead lap cars pitted under the third caution just ten laps later, Eckes was elevated to the lead, a lead he wouldn’t give up the rest of the distance.

“I didn’t expect to win today. I thought we would have to just run the day out. Once I figured out I was driving the car all wrong it really took off.”

Creed finished in second. He passed Seavey on the final restart but ran out of time to track down Eckes over the final two laps.

“I got into the 20 (Seavey) off two and got a little sideways and gave up three or four car lengths to the 15 (Eckes),” Creed said. “That was all he needed. I felt like we had a good car but we had to go from the back to the front of couple of times.”

“Track position was pretty big all day,” Seavey said. “We got up to the lead but got blocked on pit road and lost all of it. We went all the way back to last and had to work out way back to the front. I didn’t think anyone could run down the 28 (Creed). We really struggled to pass outside of restarts. But we had a lot of fun, and we’re looking forward to DuQuoin.”

Travis Braden finished in fourth, with Ryan Unzicker in fifth.

Gus Dean started from the pole for the second consecutive race. He led from laps 28 through 33 before eventually finishing seventh.

There were six cautions for 38 laps, holding the average speed to 71.200 miles per hour. The most spectacular incident of the day involved Chase Purdy, who had an engine failure that erupted into smoke and flames going into turn three on lap 25. Purdy was evaluated and released without injury.

There were six lead changes between five drivers. Eckes led the most laps on the day, pacing the field for a total of 47 laps.

The next event on the schedule for the ARCA Racing Series is the rescheduled Primera Plastics 200 at Berlin Raceway on Saturday, August 25.