Stellar Squad is a perfectly crafted strategy in which your mission is to protect our planet Earth from the invasion of robots to take control over our planet and gradually overcome it. In each round, give instructions to your combat unit, use special attacks, eliminate robot waves, and do not let them get to your base. That's why humanity let machines do all the dirty work that makes life possible, while human being do all the other things that make life pleasant and worthwhile. Once the AI is competently programmed and working smoothly, it is completely honest and reliable. But there are no happy ending in history, only crisis points that pass. red Union Hackers, who warned about dangers of the use of a robotic labor force, struck with a terrorist attack at a small planet named Ar2ino, a theme park modeled after the 20th Century Earth, and hacked its main Artificial Intelligence units. Their attack was a success! in a minute, a peaceful bots turned into merciless killers and attacked human visitors. Some of the remaining humans were evacuated, and the planet was quarantined to prevent the spread of this robotic disease.

An awesome real time strategy game set in near future where cyber-terrorists hacked the AI network and turned all, once human-friendly robots against their creators. You are in charge of the spec-ops team that has to neutralize the threat. Shoot down all waves of attacking robots and defend your ship at any cost. Dispatch your units and upgrade their equipment for better combat performance. See the in-game tutorial for more details! 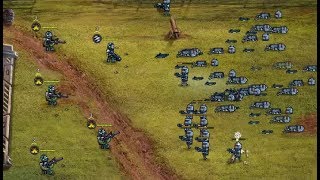