Twitter is an online social networking tool in which users post 140 character updates (tweets) of what is going on in their lives along with links to things they think are interesting, funny, or useful to their followers (“following” being essentially what “friending” is on other sites). People use twitter in many ways, some as a newsfeed by following prominent people or networks, some as a pseudo-chatroom by limiting their followers and whom they follow to close friends and family, and some as a microblog for updating people about the work they are doing and their personal lives.

Plurk was founded in May 2008 and since then the service has been doing fairly well even though there’s a tough competition from sites like Twitter, tumblr etc. The functionality of Plurk is similar to Twitter but with certain modifications. Plurk allows text posts up to 210 characters (70 characters more than what Twitter allows). The labels Twitter uses on Donald Trump’s claims of voter fraud are now appearing in memes, and brands like Oreo and Burger King are adding their own flavors. Simultaneously, Twitter says that the CPE (cost per engagement) is down 12%. Twitter points to improved click-through rates and audience growth for these numbers. If your Twitter marketing strategy could benefit from what looks like cheaper and more engaging ads, you might want to check out our guide to using Twitter ads.

@mymom
follows @me and @mybrother

Twitter users choose who they do and do not follow. They have total control of what tweets they see in their home feed. When I refer to your “Home feed”, I’m referring to what you see when you first open the twitter app (or open twitter in the browser). This is different from your personal twitter feed (essentially your “profile” twitter.com/yourusername or the “Me” tab on mobile) which contains all tweets you have created (aside from replies to others, see section below on @ replies. You can have an unlimited amount of followers, but only follow a select few people if you want, making it easy to stay in touch with the people you care to stay in touch with. You cannot control who follows you unless you set your account to “private”, in which case you would need to approve every new follower. Generally, even if you have a public account with lot of strangers following you, it doesn’t alter your experience very much as most will not directly engage with you. (FYI these are fake twitter names, my (the author’s) actual twitter username is @jessicahische.)

the person tweeting is pictured • their tweet is the large text
very important information is in red
me Jessica Hische
I am a compulsive oversharer!

• anyone that follows @me will see this in their Home feed

• this will show up on my profile (Me) page

fanperson John McGraphicdesign
@me OMG ME TOO! It’s like a disease!

• because I do not follow @fanperson, this does not show up on my Home feed, instead this shows up in my Notifications (Mentions) feed

• because @fanperson put my username at the beginning (this is called a reply or @reply), it does not show up on @fanperson’s followers’ Home feeds, unless they follow us both

• because this tweet begins with my username, it does not show up on their profile (Me) page

• by putting another person’s username at the start of a statement, it limits who sees it • @me, @mymom, and @mybrother see this on our Home feeds because we all follow each other

mybrother Jessica’s Brother
Not much, @me. What’s good?

• anyone that follows @mybrother will see this on their Home feed, whether they follow @me or do not follow @me

• If a username is not at the start of a statement, everyone that follows @mybrother can see it

• This is generally the incorrect way to reply. There are times when you want to share a reply with your followers (e.g. if your reply contains something useful for your followers) but not in this circumstance or similar circumstances

• if you DO want to share a reply with your followers, you can put any character before their username (typically a period) and this allows all of your followers to see it. It takes the person’s username and puts it “in the middle” of the tweet.

me Jessica Hische
@mymom @mybrother so. full. of. pizza.

• @me, @mymom, and @mybrother see this on our Home feeds because we all follow each other

• only the first user mentioned at the beginning and my username control who sees this tweet, any users mentioned after, even directly after, does not affect this

• because I do not follow @totalstranger, this does not show up on my Home feed

• because my username is in the middle of the statement, this does show up on @totalstranger’s followers’ Home feeds

• because my username is in the middle of the statement, this does show up on @totalstranger’s profile (Me) page

• @totalstranger does not follow me, but can still @mention me (use my username) in a tweet and I will see it in my Notifications feed

• @mymom @mybrother and @fanperson do not see this conversation on their Home feeds because they do not follow both of us, but they do see my original tweet

• all users can see all replies to a tweet by clicking on it—the replies are threaded together chronologically, so you can see the full conversation surrounding any given tweet. Usually the only people who do this are those participating in the conversation or those interested in what others might have said on a topic. For instance, if someone tweeted “Any recommendations for a restaurant in Mitte, Berlin?”, others interested in those recommendations might click to see what has been said. There is a difference between “replying to” a tweet and simply beginning a tweet with a person’s username. The former will keep the conversation in tact, and the latter will not.

• because you can see a reply thread by clicking on a tweet, any tweets that you write are not 100% private even if directed at another user. The only way to make sure a conversation is 100% private is to exchange direct messages (see the Messages tab in the browser or on mobile)

Direct Messages (Messages) are private tweets that are exchanged between two users that follow each other. You cannot message someone that does not follow you and vice versa. Direct messages are the only private way to converse on twitter. “DM’s” as they were once called (now probably just called Messages) are basically like emails. They are unsearchable on twitter.

me Jessica Hische
Check out this cat vid! tinyurl.com/2funnycats
me Jessica Hische retweeted by mybrother
Check out this cat vid! tinyurl.com/2funnycats
reply • retweet • like
mymom Jessica’s Mom
RT @me Check out this cat vid! tinyurl.com/2funnycats
Retweeting is used when you want to share a tweet from another user your followers (for instance something you found funny or a link to a helpful article). There are two ways to do this, a Retweet (which just reposts a user’s tweet to your followers) or a Quote Tweet in which you comment along with a link to their original tweet. Before Twitter built in this retweet feature, users would copy someone’s tweet and write “RT” before it so you would know it was a retweet. You still see this method showing up occasionally by early Twitter users, though it’s increasingly uncommon.

fanperson John McGraphicdesign
Having tons of fun at the #imaginaryconference! 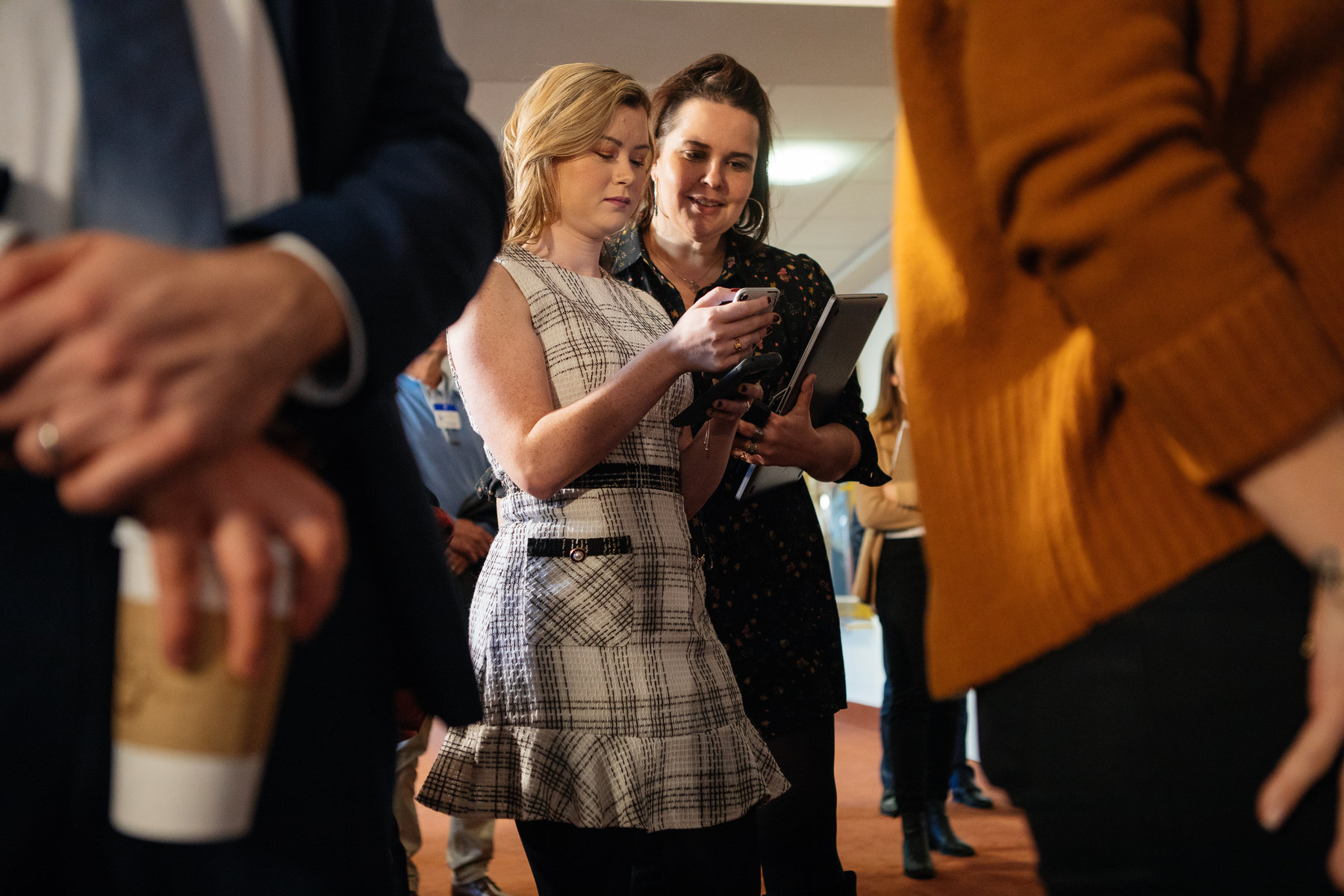 Hashtags are a way to label tweets so that other users can see tweets on the same topic. Hashtags contain no spaces or punctuation and begin with a “#” symbol. Many times at events like conferences or concerts, the organizers will tell attendees to add a particular hash tag to their tweets to gather opinions about the event and unite people at the same event.
me Jessica Hische
Paula Abdul & Color Me Badd was #myfirstconcert! You?
Twitter users create trending topics by using hash tags. For instance, a user might create a hashtag as a fun way to start a conversation.
mybrother Jessica’s Brother
When will this cough stop?? #imeanreally. #srsly. #cough.
Lastly, hashtags are used to punctuate statements or jokes on twitter. Some twitter users make sentence-long hashtags for comic effect.

Twitter is different from Facebook because it has an opt-in take on friending vs. an opt-out like Facebook. If you accept a friend request on Facebook, you automatically “follow” each other. This means that if you have 200 Facebook friends, you can potentially see 200 people’s news in your feed (they have algorithms which narrow it down to who you most likely want to see, but still. If there is someone annoying in your feed you have to opt-out of following them or “hide” them). On Twitter, you can be followed by 2,000 people but only see 50 people in your feed—50 people you CHOSE to follow. The main difference between the two is that Twitter is much more simplified. There is a character limit to posts, no complicated profiles, relationship statuses, etc. Because of this, Twitter has become a top choice for professionals that want a social / semi-work-related network through which they can share work news (and not feel smarmy) alongside personal news. Many people (myself included) link their twitter account to their Facebook account so that they can instantly cross-post to Facebook from Twitter.

Twitter is awesome, but while it seems like a relatively simple service, it is quite nuanced. I hope this site helped you or someone you know get acquainted with Twitter so that you can stop writing your tweets incorrectly, accidentally airing your dirty laundry to the internet at large. I am not an employee of Twitter, just an avid (understatement) user of the service that wanted to lend a hand to Twitter n00bs. This site is not a comprehensive guide as Twitter is always adding new subtle features to make their service more useful and user-friendly, but this should demystify most of the basics. You can always visit support.twitter.com to find out more.